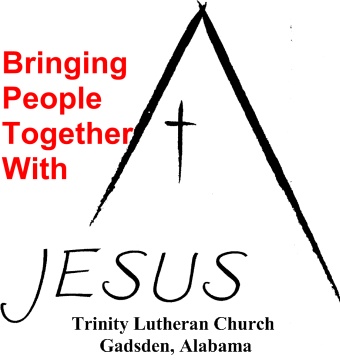 Trinity Lutheran Church, Gadsden, has served Northeast Alabama communities since 1938 with preaching and teaching the Gospel and ministering the Holy Sacraments while serving as witnesses to the love and mercy of Jesus Christ our Lord and Savior. We are a family focused church striving to bring people together with Jesus in all we do.

Starting in the 1930’s job seekers with families moved here to work in new industries. The country was making a transition from economic depression to the emergence of an economy haunted by the fear of war.

Through the service of dedicated Lutheran pastors and laypersons, the congregation found the God-given resources needed to pursue its ministry in a succession of worship locations until our current property on Rainbow Drive was obtained in 1958, Trinity’s 20th year.

Trinity thrived as industries provided well-paid jobs to newly arrived workers some of whom were Lutherans. Our numbers grew through marriages and invitations of friends and neighbors. Trinity’s growth in numbers and spirit prompted outreach ministries including Easter Sunrise Services in earlier years and a Christian Preschool which continues to support parents in the early education of their children.

Despite the loss of significant members from a separation that occurred in the early ‘80’s, Trinity’s remaining flock stood faithful in the doctrines and teaching of the Evangelical Lutheran Church established in the Reformation and declared by the Lutheran Confessions. As a congregation of the Lutheran Church-Missouri Synod, Trinity continues its dedication to upholding the inerrant and infallible Word of God.

The church has also a history in supporting new missions in Albertville, Fort Payne and Talladega, though with varying success. The mission first begun in Lincoln, AL, then moving to property obtained near Talladega named Our Redeemer was closed due to non-growth. However, a thriving non-Lutheran congregation has been established there.

With an active Ladies Guild,  Church Event Committee, Bible Study groups, Sunday School classes for all ages, music program and  Church Council, Trinity remains committed to the purpose as given in our credo: “Bringing People Together with Jesus.”

As we work together guided by the Holy Spirit, the grace of the Lord Jesus Christ and the love of God, Trinity will keep on in good times or bad, with success and occasional failure trying to always be obedient to “the Great Commission” with all the gifts we have been given to serve Him and the Christian Church on earth from our place in His Kingdom.

On reflection, much has happened at Trinity since its beginning and there is much work yet to be done. But this is God’s work, good work, wholesome productive work that brings people to Christ. As the Trinity emblem proclaims,